The organization is in a strong financial position, with sufficient reserves. Over the past two years, the organization has been cash flow neutral. Due to an extraordinary gift, FY21 had a large surplus. Even though that gift was not replicated in FY22, income still increased by 8%. At the same time, all three programs saw expansions and major improvements that increased overall spending by 60%.

To achieve a balanced budget for FY23 we are planning a 10% growth in funding (to $630,000) accompanied by a 7% decrease in spending. Increased funding will come from several new initiatives, including but not limited to: 1) in-country fundraising, 2) increased social media marketing designed to attract new individual donors, and 3) expanded grant proposal writing.

To reduce expenses, we are: 1) holding Sponsorship expenses steady, 2) reducing Model Schools expenses (this was planned as we complete the major infrastructure projects at the four Model Schools, and 3) reducing Tenda Teachers expenses (as we phase out of Wave 1 schools).

If funding increases beyond the current projection of $630,000, we have a list of projects that we would like to implement. 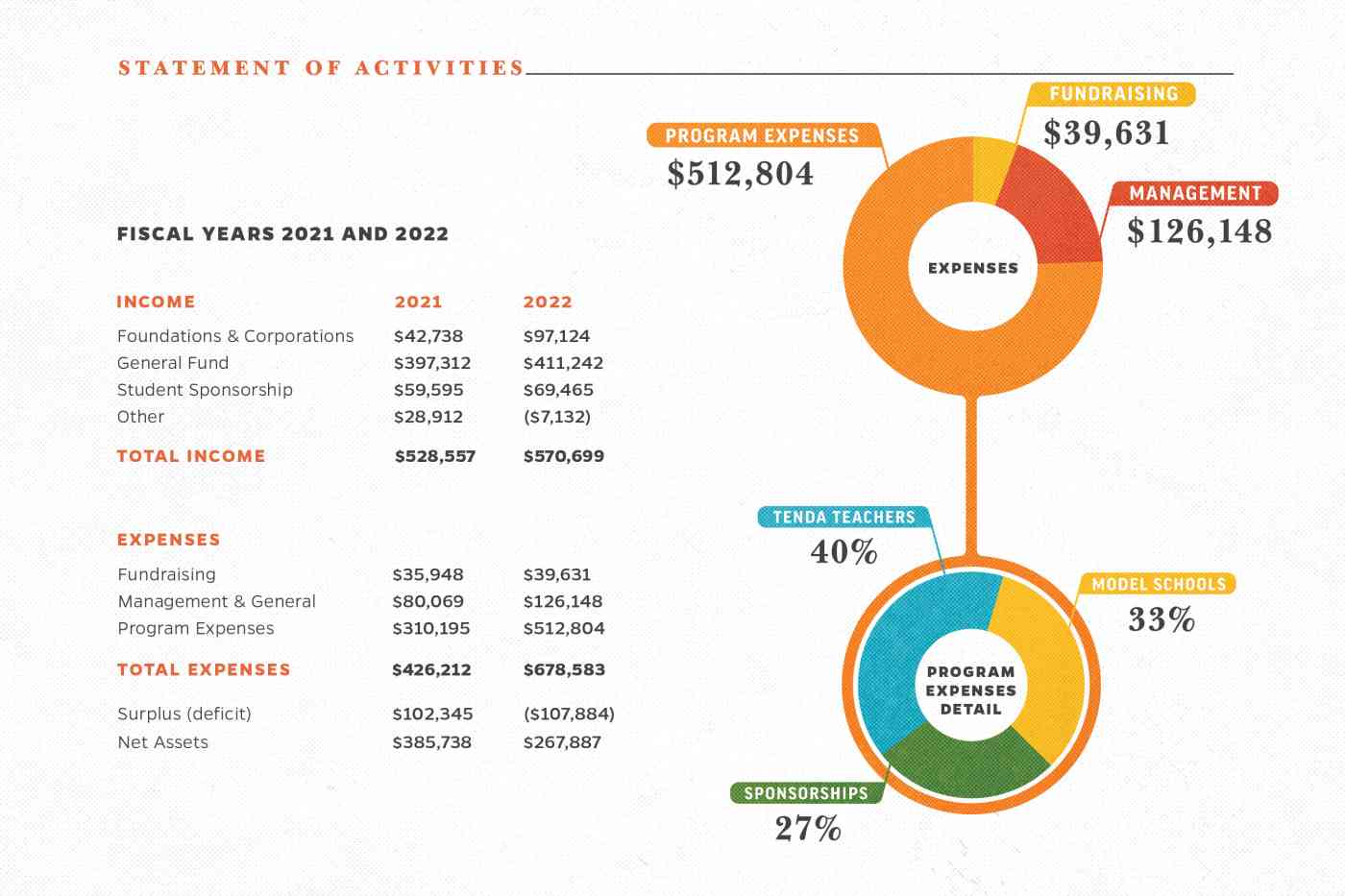 Our annual reports highlight our program achievements, summarize our financials, and recognize the generosity of supporters and volunteers.

Project Zawadi prides itself on using donations in the most efficient and effective way possible. Project Zawadi is committed to transparency in all aspects of operations and to honoring the donor rights outlined in our donor relations policy. We encourage you to review our financial statements and to contact us directly at info@projectzawadi.org for additional information.

*Charity Navigator statement (December 17, 2021): At this time, Project Zawadi has a failing grade with Charity Navigator. There is one small error on our FY2021 990 IRS return. Although we did indicate the number of Board Members, we failed to indicate how many of them are independent. (All of them are independent.) Therefore, Charity Navigator's automated rating system assumed that we have no independent board members and deducted more than 30 points from our score. Were it not for this one error, our score would be a perfect 100. Unfortunately, their system and procedures do not allow for any corrections or amendments for organizations with budgets under $1,000,000 (one million dollars annually). Although we have appealed to them on multiple occasions to amend, they have refused. We have no choice but to wait until March 2022 when the corrected and updated 990 IRS return will be recognized by Charity Navigator's automated system.

We are currently rated at the highest possible level of Platinum on Guidestar (now called Candid.)